A sense of the real Africa in Sabi Sands

Idube Game Lodge is set in an indigenous garden of tall trees and cool, green lawns watered only with recycled water. Originally designed to blend into the bush with rough, natural coloured bricks, plastered walls round the outside showers have been added creating a pleasing contrast. Tiled roofs create a clean, cool interior. The thatched bar and entertainment areas have an immediate appeal and are the focal areas for guests to gather. The open lounge is a glorious place to relax, whilst waiting to see what animals will come wandering in front of the lodge.

There are a number of viewing platforms around the camp where guests can watch game during the day. There is also a dam directly opposite the lodge with a sunken hide for guests who prefer to get really close to animals. The swimming pool is well situated for both bird watching and game viewing, whilst cooling off with a refreshing drink in hand. Idube happily hosts families of nyala and warthogs, which are seen almost daily around the entire lodge area. Many guests prefer just to sit on their private deck enjoying the quiet and watching squirrels, monkeys or the many other creatures that have made Idube their home.

The eight individual suites are built at some distance from each other among Knobthorn and Jackalberry trees. The extensive lawns are home to a variety of animals. Although these tolerate the presence of humans, they remain wild and free. The lodge accommodates a maximum of 20 guests. The suites are all individually decorated in a modern African theme. All have high ceilings and are particularly suitable for anyone suffering from respiratory problems. The windows and doors have extra screens so that the windows can be left open at night. Each suite is air-conditioned and there are overhead fans. In addition to the original suites, the new Makubela suites offer the ultimate in luxury, comfort and privacy. Named after a female leopard which included the lodge grounds in her territory, the suites are built at the end of a raised walkway.

There is an early morning game drive and a late evening game drive over an area of approximately 10,000 hectares. Youcan expect to see some, if not all, the Big 5, as well as many other species of game and some of the over 300 species of birds. Animals are usually seen from very close quarters, the sighting is professionally handled and controlled. Drives are normally 3 to 4 hours long, with a stop along the way for tea, coffee or sundowners. Idube is particularly well known for the frequent and excellent sightings of leopards - a photographer’s dream come true. After breakfast, a morning guided walk is offered or you can relax round the pool or on your decks.

Idube has linked to local communities who have put together an fascinating village tour. Included in the tour is the local school and pre-school, choir and dancers, watching local food being prepared and trying it afterwards and ending up with the little cultural museum. Other trips, such as an elephant education excursion, can be arranged on request.

I stayed in Idube for 2 nights just after my arrival in ZA and was extremely positively amazed. I took a charter fight from JHB airport, was picked up at the sand strip and within 15 minutes in the Lodge. Fresh cool drinks, care taking people, lots of information. I was afraid, as I traveled alone, that it could be boring. Idube is far away from that. Everybody shares one table and its very easy to communicate with all other guests and get into contact. Go there, you cannot be disappointed.

Our guide & tracker were extremely good. Took us off-road to look at the animals close up - that was the highlight of the drives. Saw elephants, rhinos and leopards in this manner - out of this world! Our guide (Andries) was knowledgeable and good in what he did, but a little too full of himself which was annoying. Food was good but not fantastic. Rooms were comfortable and well equipped. The hostess (Melinda) is very helpful and a genuinely nice person. Gift shop is surprisingly very reasonably priced and we bought some gifts from there. It gets bitterly cold during the game drives though, as the land rovers are open top and we were there in winter. Lovely grounds to explore.

What about the price? Indication: $$$
Hover, click or tab the price for your local currency

Idube offers a great combination offer when staying two nights at Idube and two nights at sister property 'Lukimbi Safari Lodge'. Lukimbi is located in the southern end of the Kruger National Park. Please ask us for rates and conditions. 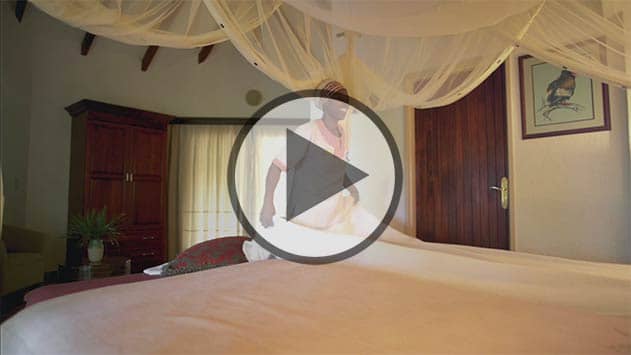 Getting to Idube Game Lodge

Read all about travelling to Idube Game Lodge on our getting to Sabi Sands page. Idube is located in the western sector of the Sabi Sands and therefore best accessed through Kruger Mpumalanga International or the Ulusaba Airstrip.

Included in your stay

Excluded in your stay

Children aged eight years old and over are welcome at Idube Game Lodge. Children between 8 and 12 years old will be charged a discounted rate given that they sleep in their parents' room.